Trump and impeachment: Can President Trump block witnesses and subpoenas, and what can Congress do about it? Lawyer and author David Stewart explains.
Hannah Gaber, USA TODAY

WASHINGTONÂ â George Kent, an expert on Ukraine and Russia who now serves as a deputy assistant secretary at the State Department, is fielding questions from lawmakers Tuesday as part of theÂ impeachment inquiry into President Donald Trump.

Kent arrived Tuesday morning under a subpoena becauseÂ the State Department attemptedÂ to block his appearance, according to an official working on the impeachment inquiry. HeÂ quickly made his way behind two oak doors to a private hearing room, ignoring questions shouted by reporters.Â

“In light of an attempt by the State Department, in coordination with the White House, to direct Deputy Assistant Secretary of State George Kent not to appear for his scheduled deposition, and efforts by the State Department to also limit any testimony that does occur, the House Intelligence Committee issued a subpoena to compel his testimony this morning,” the official working on the impeachment inquiry said. “As is required of him, DAS Kent is now complying with the subpoena and answering questions from both Democratic and Republican Members and staff.” 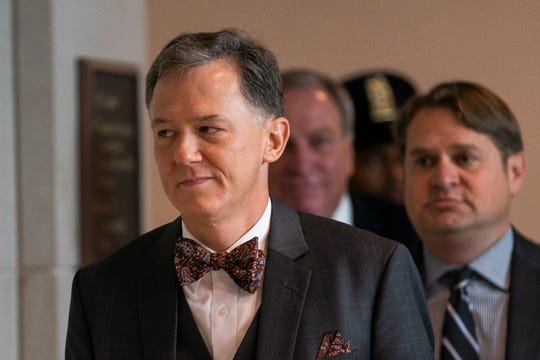 George Kent, Deputy Assistant Secretary of State for Europe and Eurasia, arrives for his deposition amid the US House of Representatives’ impeachment inquiry into President Trump in the US Capitol in Washington, DC, USA, 15 October 2019. Kent, who appeared after receiving a congressional subpoena, faces questions from three congressional committees on a whistleblower’s complaint that US President Donald J. Trump requested help from the President of Ukraine to investigate Joe Biden. (Photo: JIM LO SCALZO, EPA-EFE)

His appearance could be important to lawmakers because he played a key role at the State Department as Rudy Giuliani, the president’s personal attorney,Â ramped up his pressure on the Ukrainian government to open investigations that could benefit Trump, including a probe of Joe Biden â one of Trump’s biggest political opponents in the 2020 election.Â

Before taking his current post, Kent served as the deputy chief of mission in Kiev, and he also spent years working onÂ anti-corruption effortsÂ across Europe. He joined the foreign service nearly 30 years ago, and speaks Ukrainian, Russian and Thai,Â among other languages.

The hearing is the first as congressional lawmakers end a two-week recess, a break that only appeared to speed up the impeachment investigation with hearings scheduled and subpoenas issued nearly every other day.Â

Lawmakers have not said much about the handful of hearings held behind closed doors over the last several weeks, even as Republicans attacked Democrats for hiding the process from the public and arguing it was unfair to the president.Â

As he arrived for Tuesday’s hearing, Rep. Michael McCaul, the top Republican on the Foreign Affairs Committee, denounced Democrats for holding the impeachment proceedings behind closed doors â in âthe most secretive room in the Capitol.â

He was referring to theÂ secure room in the basement of theÂ Capitol Visitor Center,Â normally reservedÂ for classified briefings, where witnesses have been grilled by lawmakers and staffers leading the impeachment probe.Â

âIf Congress is going to proceed on this measure â which is probably the most important thing that Congress can do is remove a president from office â thenÂ it should do so with the spirit of fairness and the spirit of due process,â McCaulÂ said.Â

Democrats, however, have argued the process was better done in private to prevent witnesses from knowing what one another has told the three committees leading the probe â the House Foreign Affairs, Oversight and Intelligence committees.Â

Along with Kent’s appearance, Tuesday also marks the deadline for Vice President Mike Pence, Giuliani, the Pentagon and the Office of Management and Budget to turn over documents pertaining to both Trump’s July 25 call with Ukraine’s president and the delay of military aid for Ukraine meant to fend off Russian aggression.Â

All of the documents were demanded under subpoenas besides Pence, though it’s possible House Democrats will issue one to force his cooperation since the White House has issued a blanket refusal to cooperate with the inquiry.Â

At least three others are also scheduled to appear before the panels this week, according to a schedule released Monday by an official working on the impeachment inquiryÂ

â¢ P. Michael McKinley, former senior adviser to the Secretary of State, is scheduled to appear in a closed session on Wednesday.Â

McKinley resigned from his post just last week after a career that spanned decades and included posts as U.S. ambassador to Brazil andÂ Afghanistan. The timing of his departure raised questions and theÂ Washington PostÂ reported that his resignation came amid low morale within the State Department and worries that Pompeo was not supporting those wrapped up in the controversy over Ukraine, allegations Pompeo denied inÂ an interview with The Tennessean.Â

“I protect every single State Department employee,” Pompeo said. “Itâs one of the reasons that we asked the House of Representatives to stop their abusive prosecutions where they wonât let State Department lawyers sit with our employees.Â Thatâs not fair.”

â¢Â Gordon Sondland,Â Trump ambassador to the European Union,Â is expected to return to Capitol Hill to testify on Thursday. The State DepartmentÂ blocked him from testifyingÂ last week.Â Sondland, aÂ wealthy former hotel magnate from Oregon, has emerged as a central player in the Ukraine affair.

â¢ Deputy Assistant Secretary of Defense Laura Cooper is expected to appear Friday before lawmakers in a closed-door session.Â

Cooper is a career Defense official, who joined the department in 2001, is responsible for policy regarding a number of countries, including Russia and Ukraine, topics that lawmakers will be eager to ask about.Â Cooper could have knowledge about the delay of military aid for Ukraine.Â

On Thursday,Â T. Ulrich Brechbuhl,Â the State Department counselor, was scheduled for a deposition with the three committees but it’s unclear if he is still planned to appear that day as he was not on the most recent schedule for this week.Â

Brechbuhl is a longtime friend of Secretary of State Mike Pompeo after both graduated from the U.S. Military Academy at West Point and served together in Germany. Brechbuhl and Pompeo were business partners at Thayer Aerospace, a Kansas defense company. Brechbuhl was among those listening to the call July 25, according to aÂ whistleblowerâs complaintÂ about the call.

Felicity Huffman Turns Herself In to Federal Prison, Husband William H. Macy Drops Her Off

Demi Lovato Gets a Tribute Tattoo for Her Late Friend

Demi Lovato Gets a Tribute Tattoo for Her Late Friend